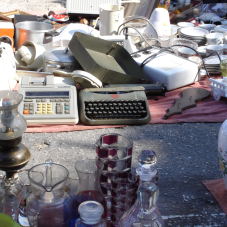 There are objects which are used. Others consumed. Others just left there and there and there and there and there. Most are rejected after some time. Some times. Enter massified waste management systems. Macro. Technical. Complex. Systems. All shapes and sizes. The systems. And the objects. All similar. The systems. And the objects. Their patterns. The unitarian tools and schemes that come along. Solutions to deal with problems. No problems. Entering in the trash bin. At the bin. Or. Depositions. Simply letting go into deprivadely inhabited wastescapes. Sometimes leaving at recycling cycles amazed to show us how such objects are not destroyed. Simply destroyed that is. Entropic dreams in reverse. And yet some subsist. Flea markets. Pawn shops. Attics and Drawers. The game of going around and around. Collectors. Hoarders. Pathological analysis. Of the system. Of the subjects. And of the objects. Of all objects. Or just. Repair and maintenance. Sewing socks. Rebuilding lamps. Freegans. Gleaners. Makers. Tinkerers. Remakers. Ready-made artefacts. Made to be transformed architectures. Subversive rationalizations. Changing tracks. Social knowledge often not knowing. Residues at the margins. Mere awe with dejobjects. Abjection. Yuck factors. Repulsions. Dirt and pollution. And what is new always at the center. Social constructions of technology with nothing old inside. As if. Not now wunderkammers. Or yet. Alternative pathways. Modern archaeological views. Discarded object as materials in social studies of materiality. The remanescent materials as full objects. Garbologies, rudologies and such. Triple play. Triple troubles to leave epistemological dumps. Recovering everyday life with broken things as a hub. Accepting residues with daily realms at the center. Embracing daily realms with residues in the middle. Connecting technology and social worlds. New transdiciplinary cultures of thinking and acting. Technacies. Fixing. Rebuilding. Recasting. Fabricating for tomorrow. Or not. Asking for a friend of a friend of a friend. Zir who doesn’t know how to deal with old stuff any more. Only grounded technical cultures may subsist. Only critical views on them should. If ever. A research in progress this might always be. Memories of past. Times. Spaces. Lessons for new ones. Move along. After what’s gone, who knows what’s coming next?